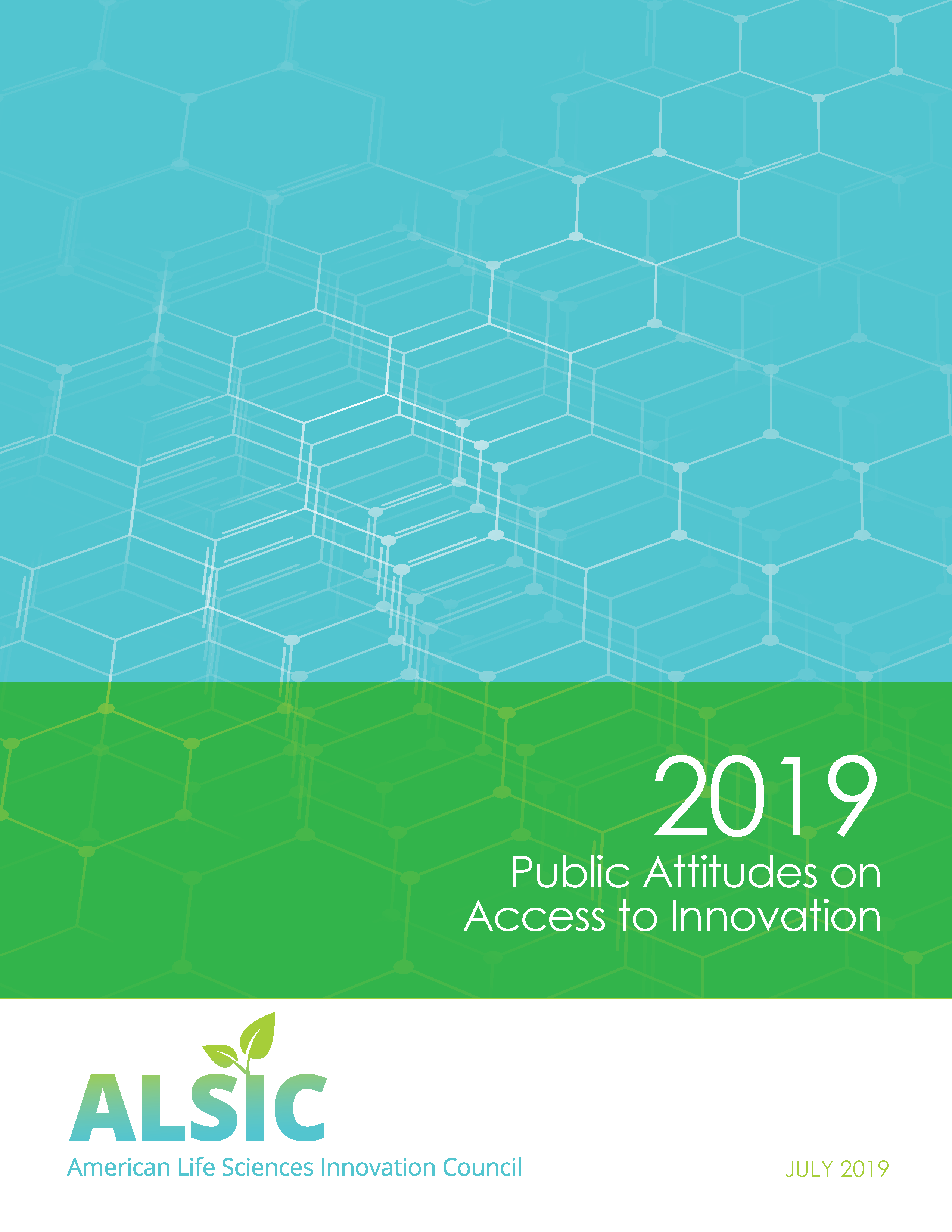 The following is the Executive Summary of ALSIC's 2019 Public Attitudes on Access to Innovation Survey. Read the full report here.

The primary objective of the individual state surveys and this aggregate report was to locate opportunities for practical policy solutions by identifying consensus opinions among the voting population in general, including traditionally disparate partisan perspectives. A secondary objective was to assess any key differences in opinion driven by age or household income that may come into play while developing specific policy prescriptions.

This report presents the aggregate results of 10 statewide surveys conducted by ALSIC between January 17 and April 11, 2019. Surveys were conducted to measure public attitudes on access to innovation.

The 10 states individually surveyed were selected from the top 30 states as ranked by bioscience industry economic impact. Choosing 10 states from this larger pool of 30 (rather than simply the top 10 states) allowed a selection of states representing a broad cross-section of geographies, GDPs, labor forces, and political dispositions.

Survey margin of error is +/- 5 percent. Respondents were recruited from the Qualtrics online panel. Each state survey included a minimum of 400 likely voters. The total sample for all 10 state surveys was 4,032.

Respondents were overwhelmingly supportive of lowering the costs of drug treatments, without limiting innovation or interfering with patient access to the best treatments.

Among the survey’s key findings:

Contrary to the perceived mood of national political polarization, a surprising consensus and opportunity for unifying policy solutions is revealed amid these aggregate survey results.

Voters overwhelmingly support the superiority of patient-physician treatment determinations over insurance or government. Further, they identify better prescription drug coverage as the most beneficial means of reducing copays and deductibles. Policies that discernably put patients first and foster a public good, without helping one population at the expense of another, are historically popular and well-received. Further, major policies that can be built around broad support are naturally more acceptable than those crafted along partisan lines. History and public opinion strongly favor legislative solutions that strengthen protections for the patient-physician relationship and improve prescription drug coverage.

By wide margins, voters overwhelmingly support policies that control costs while supporting innovation and maintaining access. Public support for access, investment, and innovation as conditions of any cost control measure disqualifies policies that would be punitive to patients and innovators. Public opinion does not support the consequences of price controls as a solution. Unlike government intervention, market-based solutions work well within the confines of public opinion. Competition and value-based contracts enjoy near-universal support within the survey and would be well-received as part of any policy solution. Other approaches merit future study, such as reforms to expedite the FDA approval process to bring new treatments to market sooner, which would improve patient access while lowering development costs.

Voters oppose limiting access to drugs generally, and government approval (prior authorization) to access drugs in particular, as cost control measures. The strongest segment of resistance by far is among adults age 55 and older, who comprised 36% of respondents. With the strongest opposition coming from older Americans, the best immediate opportunity to improve patient access and coverage is continuing to strengthen Medicare Part D.

Voters generally oppose hospital and physician price markups and overwhelmingly support limitations on markups. Three in four respondents believe markups should be limited to 10%, and nine in ten believing markups should be limited to 25%. The chasm between widespread public opinion and common practice among providers (hospital markups approaching 500% or more) suggests an opportunity for policy reform among elected leaders. By pursuing consensus avenues at the provider level, lawmakers may find opportunities to reduce patient costs without limiting patient access or stifling innovation of new drugs and treatments.